HERE IS YOUR AUGUST ISSUE OF SENIORS ALIVE!

Here in New Hampshire two elections are coming up and you don't want to miss them.

A Democratic Party primary takes place on September 8, 2020, and a Republican Party primary takes place on September 8, 2020, to determine which Republican candidate will run in the state's general election for the US Senate on November 3, 2020. Hillsborough is in the 2nd Congressional District and is represented in US Congress by Democrat Ann McLane Kuster, who is not up for reelection this year. New Hampshire's 1st Congressional District is represented in US Congress by Chris Pappas, who is up for election this year. On September 8, 2020, there will be a Republican Party primary to determine who will face Chris Pappas in the general election for US Congress on November 3, 2020.

You need to vote!

IT IS YOUR DUTY AS A CITIZEN OF OUR GREAT DEMOCRACY TO VOTE!

This year the NH Secretary of State has permitted mail-in voting by citing COVID19 as the reason for requesting an absentee ballot.
Because of the continuing presence of, and threat from the COVID19 virus, many will want avoid going to town halls to cast their ballots by mailing in their ballots.
Because of the likely large number of people requesting ballots, and also because often those who have not previously voted by mail might not correctly fill out their ballot applications, it would be smart to request ballots early. To ensure that your ballot application has been correctly filled in, and them be sure to mail your ballot in plenty of time. You can obtain ballots for Primary and General election.
Ballots can be obtained from your town clerk, or they can be downloaded from the NH Secretary of State's web site:
https://sos.nh.gov/ElecForms2.aspx
Posted by Gary Samuels at 9:36 AM No comments:

Here is your July issue of GHSS newsletter SENIORS ALIVE!


On this Independence Day I ask myself, "what is the Spirit of our nation?"

Our national motto, E pluribus unum -- from many, one --  is certainly aspirational. The famous 'melting pot.' We've come from all over and, we bent our backs together in the common task of making a nation. And we did make a nation, perhaps the greatest ever.

Or at least that's how the story goes.

It has been obvious for a very long time that African-Americans have not been swept up in that 'unum' bit.

I am very happy on this Fourth of July to experience what some consider to be the greatest movement in our nation's history. Attitudes toward race are finally shifting. Now roughly sixty percent of Americans think that African-Americans face a great deal or a lot of discrimination. And rather than a backlash to recent riots and demonstrations, a critical evaluation of policing, and of historical representation by monuments. Hopefully this roll will continue.

I am heartened that the audience receptive to increasingly overt, racially charged campaign rhetoric coming from some political candidates is dwindling. Most are just not buying it.

So yeah, great: let's get moving on making a more just society for all of us.

But, wait: what's going on with this virus?

Despite everything we know about how serious COVID 19 is, how it spreads in hot-house conditions of bars and churches, political rallies, how it kills our elderly (and not so elderly), why is it so difficult for so many people to not get  it? Not get that their actions only make the disease worse?

Our national leadership must bear a lot of responsibility for current outbreaks, but -- folks: you should know better! You are smart. You want your kids to get into STEM programs. Why do you ravage our best scientists when they tell inconvenient truths?  Show some restraint in our National Interest. Use your noggins!

Nature, whether it is our climate or COVID 19, is completely apolitical. Nature happens. It responds to physics, mathematics and biology, not to demagoguery or wishful thinking--  or gun toting yahoos claiming some God given right -- to what? Infect their grandmother with a potentially lethal disease?

Medical science makes it clear that this virus can spread from person to person in droplets that are expelled when we speak -- or cheer -- and even in tiny aerosols. Moreover, 25 - 35% of people who are not experiencing symptoms of the disease can still be shedding the virus (Have you been tested? probably not...). Masks prevent, or at least reduce, spread of this virus. Finally, while we older citizens are more susceptible to infection, those young and invulnerable folks are filling hospital beds now. And, to make this worse, there is good evidence that a goodly  number of those young ones who recover will suffer long-term problems with a variety of their organs.

So, with all this -- you might make somebody else sick, or even kill me, or you might get sick and suffer for a long time after your 'recovery' -- why are so many people jamming themselves into close proximity in bars, private functions, churches, or political rallies?

This is no way to mitigate this virus. Go out responsibly! It is possible!

I am proud that New Hampshire has been doing well. But we cannot let up. We are in an economic hole not of our making and the sooner we are free of this virus, the quicker we can get back to a likely new normal.

If you receive a proxy request in writing and through phone calls from LEGG Mason at 313-466-5830 this is a SCAM. If you get an email or telephone call just tell them to put you on DO NOT CALL list and tell them you will report it to the police.
Posted by barbaracavanaugh1949 at 9:22 AM No comments:

THIS IS A SCAM, DO NOT OPEN IT. BLOCK AND DELETE THIS ONE QUICKLY. IT IS A SCAM
If you receive the following:
"Security Centre@outlook-DF3734321c1a67
bg@outlook.com"
We found instance of child pornography accessed from your IP address..etc............"
Tech Support Scam Uses says the sender wants access the recipient's IP address and MAC address are what the sender wants access to.
Posted by barbaracavanaugh1949 at 9:19 AM No comments:

WE MAY BE SHELTERING IN PLACE, BUT YOUR GHSS IS STILL TICKING ALONG!


We're adapting to life in time of a pandemic. It's been an especially scary time for seniors because we are the group most  to this virus. Although we live in an area that has no been as badly affected as some others, community based infection continue to occur in all counties.

There is some loosening of restrictions, response to a longing to resume a normal life. But the virus is still with us. We must continue to practice precautionary measures as recommended by our state medical services. This certainly includes avoiding large groups and please, wear a mask.

Between 25-35% of people who do not show symptoms of the disease can be carrying the virus, and yet only a small number of people have been tested for the virus. If you have not had the PCR test, you  cannot be certain that you do not carry the virus. Wearing a mask won't keep you from becoming infected, but it can keep you from infecting somebody else. Wearing a mask is a sign of respect. I am honestly highly dismayed at the number of shoppers in Shaw's early Sunday morning who do not 'get it,' are not wearing masks.

The primary concern of GHSS is for you. That you be able to live full lives in health and happiness. We follow the advice of health scientists in curtailing most of the activities that you Seniors have so enjoyed in the past.  Along with you, we hope this terrible time will quickly pass.

Meanwhile, we urge you to be careful. Best to stay in and stay safe. Please respect your friends and neighbors by wearing a mask.


HERE IS YOUR JUNE ISSUE OF SENIORS ALIVE!

Shopping at Warner is resuming, as is armchair yoga. To participate in either of these activities you will have to wear a mask.
Posted by Gary Samuels at 7:19 AM No comments:

As this situation continues to unfold, GHSS is following every precaution to protect our senior citizens.  Therefore,  all GHSS activities have been suspended indefinitely and the newsletter, Seniors Alive,  for the month of April will not be published.  We need seniors to stay inside out of the line of the coronavirus.  We will continue to update everyone as things change.
Posted by barbaracavanaugh1949 at 9:16 AM No comments:

HERE IS YOUR SENIORS ALIVE! FOR MARCH.
Posted by Gary Samuels at 8:16 AM No comments:

Every February, Greater Hillsborough Senior Services (GHSS) is required to hold an Annual meeting for the purpose to elect officers and board members, report on the past years activities and to discuss future plans, and present several awards.

This year, the GHSS Volunteer of the Year Award was presented to Glenn Mathison for his restoration work on the old bus and his willingness  to drive when needed.

The GHSS Board Member Above and Beyond Award was given to John Shaw for his dedication in researching and negotiating  the purchase of our new bus and his continued  leadership role in various events in 2019 and the past. 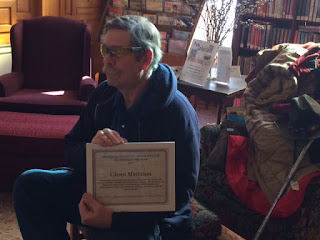 John Shaw, Board Member Above and Beyond Award 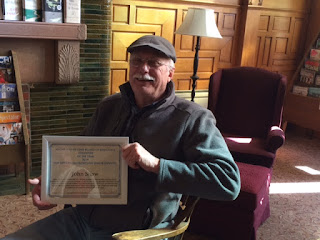 Here is your February issue of Seniors Alive!
Posted by Gary Samuels at 9:09 AM No comments:

RINGING IN THE NEW YEAR: GHSS CELEBRATES THE YEAR OF THE RAT 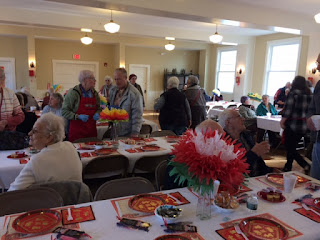 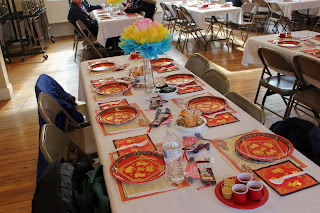 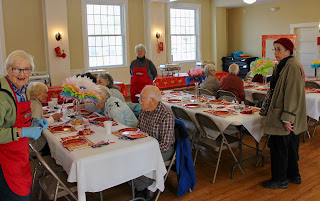 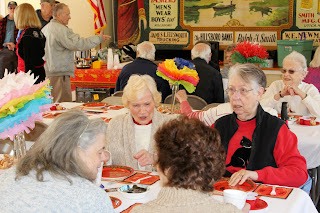 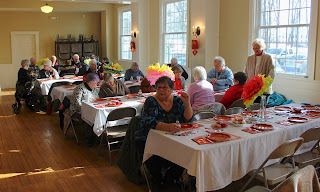 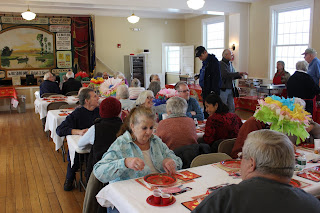 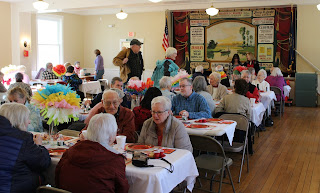 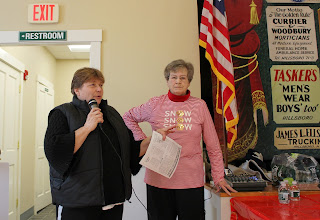 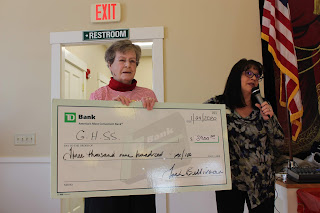 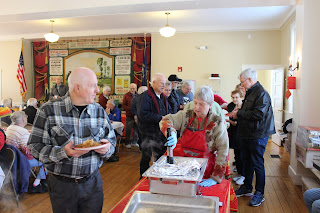 On Friday, January 24rd, Greater Hillsborough Senior Services (GHSS) celebrated the Chinese New Year by holding their annual Chinese luncheon in the Deering, NH Town Hall. Over 80 people were in attendance to partake of delectable dishes prepared and donated by Ming Du of Hillsborough. Tina Simpson of Southern NH Services presented information on fuel/electricity assistance and Tia Belliveau, representing TD Bank, awarded GHSS with a check for $3,800 from funds raised through TD Bank’s Affinity Program.
Posted by barbaracavanaugh1949 at 12:21 PM No comments:

HAPPY NEW YEAR TO YOU ALL!

HERE IS THE FIRST ISSUE OF SENIORS ALIVE! FOR THE NEW YEAR.
Posted by Gary Samuels at 1:03 PM No comments: